What's New in Review Board

We're in the home stretch now with our release of Review Board 2.0 RC 1.

Our fist release candidate was focused on squashing bugs, improving performance, and tweaking the usability of the product, in preparation for the final 2.0 release.

We've fine-tuned the diff viewer, cutting the time of some operations in half. We've also reduced the startup and response time for installations using extensions.

36 bugs were fixed since beta 3. These cover site installation, administration, the diff viewer, the new My Account page, and much more.

For extension writers, we've added a new hook for custom authentication backends, as well as a few more goodies to help keep your extension code tight and clean.

This release also includes the security fixes in the 1.7.22 release, and strengthens security and access logs in other areas.

If you're planning on upgrading to Review Board 2.0 when it's out, this would be a great time to test. We're hoping to release it soon, and your feedback will go a long way to ensuring this release is solid.

The full details are in the release notes.

Review Board 1.7.22 is out. It's primarily a bug fix release, with an important security update (particularly for public installations).

An XSS vulnerability was reported that we've patched that involves the Search field. If you're running a 1.7.x release, we recommend updating to 1.7.22.

There's also a large number of bug fixes in this release. We've been working hard on going through the bug tracker and fixing up as many bugs as we can. This includes Git diff parsing fixes, compatibility improvements for Mercurial configurations, easier support for enabling HTTPS, and more.

See the release notes for the complete list of fixes.

We thought it was long past time to show off some of the excellent work our UCOSP Fall 2013 students have been doing, and introduce you all to our Open Academy Spring 2014 students.

In Fall of 2013, we had a batch of great students from across Canada: Elaine, Natasha, Edward, Behzad, and Alissa. We met up at Mozilla in Toronto and got everyone set up. From there, they flew through the semester, adding some great improvements to Review Board.

We put a little demo video together with our Winter team showing off all their work. Check it out!

It was a fantastic team, and we're very thankful for all the great work they've done!

We participated in Open Academy this year for the second time, and were once again privileged to have another fantastic group of students, spanning schools across the globe. This semester, we have Anselina, Bhushan, Edwin, Iines, Joonas, Mirai, Olessia, Stephanie, Tami, and Tomi working with us.

We met up at Facebook HQ in February for a fun and intense weekend of hacking. There, we got to know each other, ate some donuts, figured out projects for the semester, went bowling, and got to hacking. 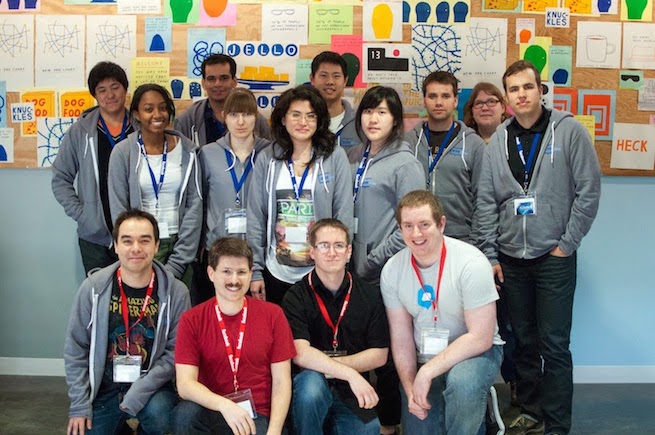 (Here are some more photos of the event, taken by Tami herself!)

They're all well into their projects at this point. There's a lot of great stuff coming:

They've been making great progress so far! They also all have work going into Review Board 2.0 or RBTools 0.6. Not a bad start!

Here's a few of our students to tell you about their experience at the sprint at Facebook:

Here's to another exciting semester!